DOM PIPKIN AND THE IKOS at Ropery Hall 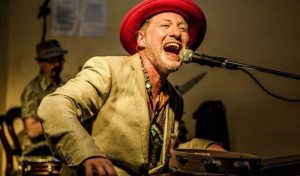 He casts such a dizzying spell that he’ll transport you straight to the heart of Bourbon Street.

Blues in Britain magazine has called this musical magic man “one of the world’s greatest exponents of New Orleans piano,” so sought after the world over that he has taken his rollickingly good band to play for aficionados as far afield as New York, San Francisco, Barcelona, Stockholm, Rome and the Ukraine.

Dom Pipkin’s unmistakable brand of boogie pays homage to greats such as Dr John, Fats Domino and Professor Longhair, and that rich tapestry shows up in his own compositions too. Dom and the Ikos, bring those New Orleans influences to life so vibrantly that they regularly pack out the legendary Ronnie Scott’s Club in London.

Their potent and infectious blend of blues, gospel, Crescent City Street music and jazz has also won them radio and TV appearances and fans ranging from Jonathan Ross and Hugh Laurie to Jamie Cullum.

The multi-talented musician has also travelled the world as the keyboard player with trip-hop pioneers Morcheeba, was Musical Director for Paloma Faith, has played for Paul Weller and Ray Davies, and has travelled back and forth between his home in London and New Orleans on a regular basis for fifteen years.

Invited to perform at the Jazz and Heritage Festival, during the world famous New Orleans “Piano Night”, alongside musical greats such as Allen Toussaint, Ellis Marsalis and Marcia Ball, he has also supported Dr John, Screamin’ Jay Hawkins and the Blind Boys of Alabama, and performed for film director Stanley Kubrik.

He headlined the UK Boogie Woogie festival in 2019 and in 2020 topped the bill at London’s impressive Steinway Piano Festival.